WhatsApp is down. Yes, and primarily all Facebook properties, including Instagram, Messenger, Oculus, and Facebook social media platforms, have been down for over two hours when writing this article. While we still wait for what Facebook says about this massive outage which is about to hit the two-hour mark, there are speculations on the Internet about a cyber attack.

However, it is too early to say that. Most importantly, several cyber experts have pointed to a possible DNS issue that may have caused the entire ecosystem of Facebook apps to crash on Monday. In particular, there are two terms coming up again and again: DNS and BGP.

Also read: WhatsApp down: Facebook, Instagram, WhatsApp, and Messenger down in global outage, company working on a fix

On social media — for now, which is mostly Twitter given that the whole of Facebook and company is down — users are saying that Facebook servers have been hacked, that hackers have brought down WhatsApp, Facebook and Instagram, that hackers have hit Facebook so hard that not even its DNS records are in existence and that its whole existence has been erased from the Internet. Well, that is a lot to take in, and you should take it without some scepticism.

The reality seems to be that even though the DNS servers of Facebook seem to have vanished and are no longer connected to the Internet, those of WhatsApp and Instagram can still be reached. However, they seem to throw other errors, indicating that internally something has gone wrong with Facebook servers.

On Monday, WhatsApp was the first platform reported to be down on the Downdetector platform and soon joined by Messenger, Facebook, Instagram, and Oculus services.

MalwareTech, aka Marcus Hutchins, a cybersecurity expert, tweeted, “Facebook, Instagram, WhatsApp are all down due to a BGP configuration error, which means it’s only a matter of time before someone tweets a pew pew map screenshot and claims it’s a global cyber attack.”

Or, in simple language, you called someone to fix your home Internet, but the so-called expert tweaked some Internet configuration, and you’re sitting in the dark. Several cyber experts have pointed out that this massive outage is a result of a flawed BGP configuration pushed by someone at Facebook on Monday.

Dane Knecht, Senior VP at Cloudflare, tweeted, “@Facebook DNS and other services are down. It appears their BGP routes have been withdrawn from the Internet. @Cloudflare 1.1.1.1 started seeing high failure in last 20mins.”

Brian Krebs, an independent investigative journalist, also corroborated this theory and said in a tweet, “The DNS records that tell systems how to find Facebook.com or Instagram.com got withdrawn this morning from the global routing tables.”

In another tweet, Krebs says, “To be more precise (and Geek Factor 5), the BGP routes serving Facebook’s authoritative DNS were withdrawn, rendering all Facebook domains inaccessible.” 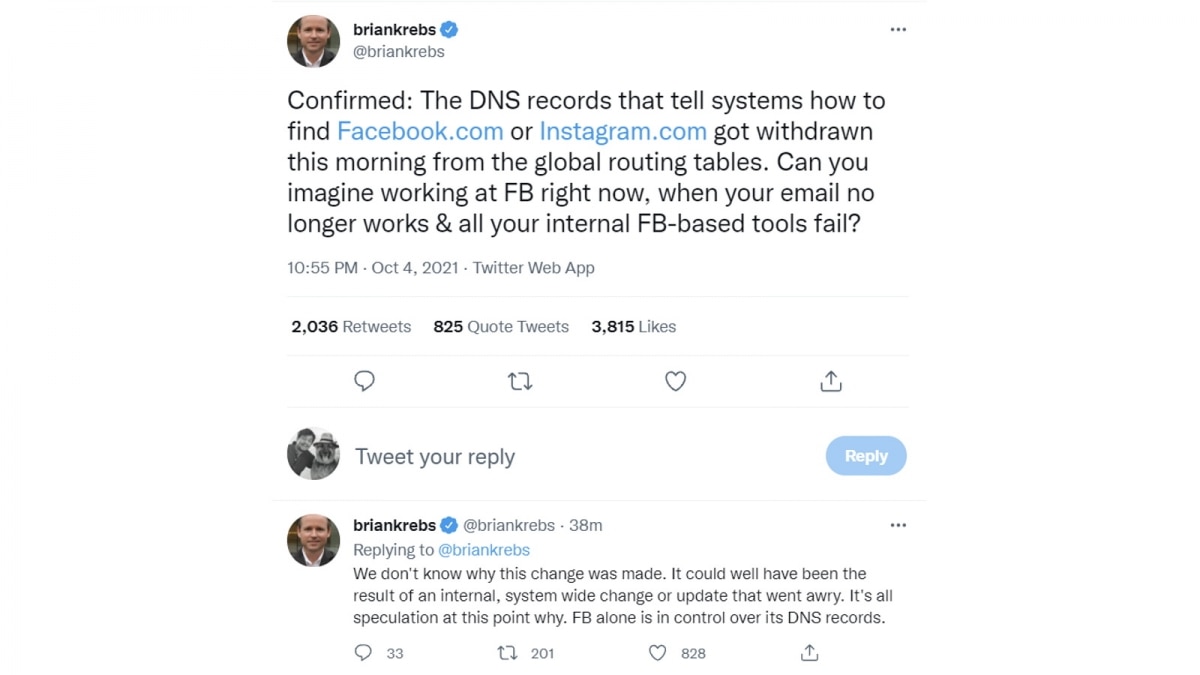 Facebook, in a statement, has acknowledged the global outage and said, “We’re aware that some people are having trouble accessing our apps and products. We’re working to get things back to normal as quickly as possible, and we apologize for any inconvenience.”

At the moment, there is no guaranteed reasoning behind this massive outage. But, October 4 will now be in history books as the day when the Facebook suite of apps was down for over two hours. Notably, this is the second time this year that Facebook and other suite of apps, including WhatsApp, have been down for such a long period of time. In April, Facebook, Instagram, and WhatsApp services were down for more than an hour.

Students At An Ivy League Business School Thought $100,000 Was The Average American Salary. The Internet Was Not Having It.