The announcement was made on Friday during a virtual awards ceremony in London that brought together the best property professionals from Africa and Arabia.

The awards are part of the prestigious International Property Awards that celebrate the highest level of achievement by companies operating in all sectors of the property and real estate industry worldwide.

They are judged by an independent panel of over 80 leading global industry experts focusing on design, quality, service, innovation, originality and commitment to sustainability.

The Fund’s Solana Lifestyle and Residences project has also been nominated as the best residential development project in Africa and will compete with top real estate residential projects globally during the grand finale scheduled for December 2021.

“The five-star awards gives us an opportunity to showcase NSSF, Solana Lifestyle and Residences and our country’s achievements on the world stage; a confirmation that taking the bold decision to build Solana was the right one and that what is being done is in the interests of the Fund members. It firmly positions the Fund as a large scale developer of substance in Uganda and the region,” Patrick Ayota, the Deputy Managing Director said.

He added that these awards are a testimony that Uganda’s real estate projects are beginning to meet global standards.

Solana Lifestyle and Residences project lies on the Fund’s 600 acres in Lubowa, an upmarket destination in Wakiso district, Central Uganda. It is being implemented in ten phases over a period of 10 years.

Phase one of the development is underway, comprising 311 high end housing units (villas, townhouses, apartments and bungalows) with associated amenities and infrastructure.

In total, it will comprise 2,741 houses and associated amenities for middle- to high-income earners. Amenities include shopping Centre, retail stores, hospital, schools, hotel, and offices among others.

“Over the years, the land has evolved into an exceptionally well located upmarket destination surrounded by existing infrastructure, desired facilities and expensive residential housing. This led us to reconsider the original development plan of constructing affordable housing, in order to determine the highest and best use,” Ayota commented.

He added that through extensive market research and exploring global trends, the Fund took the bold and visionary decision to move from their original concept and instead create a development which would be a “first of its kind” not only for Uganda, but for the rest of East Africa.

NSSF owns over 2000 acres of prime land in Kampala and surrounding areas. According to the Fund`s Investment policy, the real estate strategy entails  unlocking value on prime land acquired through land banking over the years. 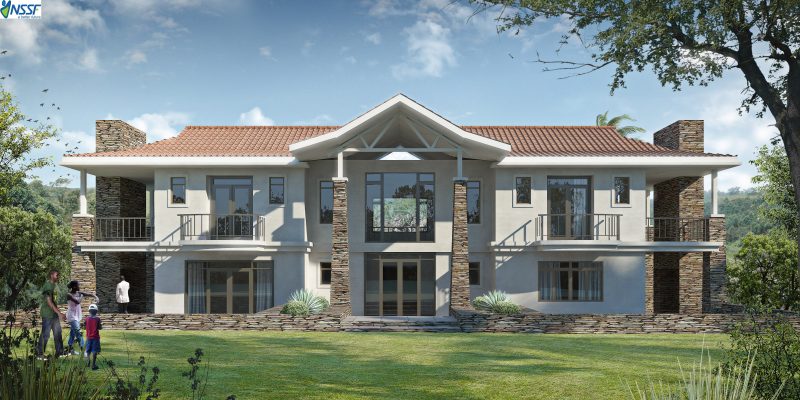 In addition to Solana Lifestyle and Residences, the Fund owns a high-end condominium housing project called the Mbuya Citadel Place and is constructing affordable housing in Kyanja and Temangalo to respond to the widening deficit of housing, estimated at 2.4 million units in Uganda.

Winning the Africa and Arabia Property regional awards places NSSF among the competitors at the grand finale of the International Property Awards that will be held at the end of the year.