Monkeys, snakes, rats and other wild creatures have taken over what used to be Gomero Primary School in Nakaseke District.

A peep through one of the glass windows of the school office, the office furniture, textbooks, wall clock among other scholastic materials bring back a memory of a once organised school.

Despite the coronavirus induced lockdown that has kept schools under lock and key, authorities in Nakaseke District have for the last three years been toying with the idea of permanently closing the school over dismal enrollment.

The school, according to the district chairperson, Mr Ignatius Kiwanuka Koomu, has been permanently closed and its code offered to one of the schools that had no government code.

“We have permanently closed Gomero Primary School and the code allocated to another school. We have also transferred the teachers to other schools. Our effort to save the school hit a dead end. The parents failed to cooperate,” he said during an interview on Monday.

The school’s closure comes nearly a decade after government had invested a colossal sum of money on constructing and repairing classroom blocks, procuring scholastic materials and recruiting new teaching staff.

Mr Kenneth Nyebaza, a former pupil at Gomero Primary School between 2002 and 2006, explained  that all efforts to save the school from closure by government by a handful of parents hit a dead end in February 2020 when the school academic year opened with a total enrollment of only six pupils.

“Gomero Primary School had permanent teachers on government payroll including the head teacher, but the total enrolment kept declining as parents opted to have their respective children study from schools that perhaps had a better academic standard among other reasons best known to them,” Mr Nyebaze, also a resident of Gomero Village said. 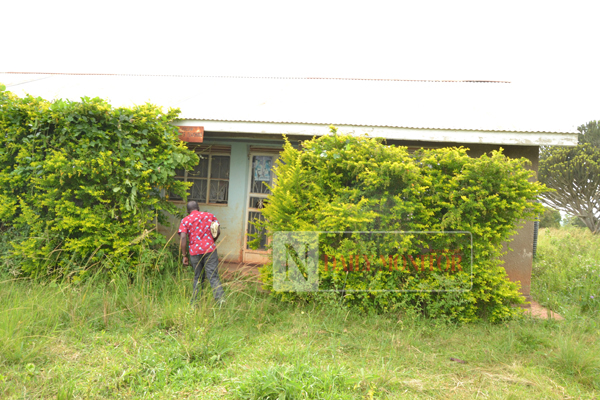 One of the buildings that used to house the school office and staffroom.

Mr Adam Mujuni, a parent and resident of Gomero Village, claims that both the parents and district officials share the blame for failing to maintain the academic standard of the school.

“I believe that the explanation relating to poor academic performance is farfetched and not the core reason for the school’s low enrolment.

“At one time, that school had over 400 pupils and had a promising future for our children. The community and the district leaders owe us a detailed report relating to the downfall and the decision to have the school permanently closed by the government,” he said.

Mr Gordon Musinguzi, the Nakaseke District youth chairperson believes that the decision by district authorities to permanently close Gomero Primary School paints a bad picture for the future of the education sector.

“We are all stakeholders in the development programmes that affect our people. In my opinion, the decision to close the school permanently is a time bomb for the future of our children who will now move long distances in search of education. We needed time to widely consult and find out why the parents had decided to abandon the school,” he said.

However, Nakaseke District Education Officer, Mr Stephen Batanudde in an interview with the Daily Monitor said all steps were followed to de-register the school.

“It is not true that we did not consult and engage the community including the parents about the status of the school where the government was spending money on teachers’ salaries and scholastic materials yet the enrollment was less than six pupils,” he said

Mr Batanudde said in 2020, the district education department realised that the school had only three pupils and they took a  decision to have its code offered to Kirangazi Chance Primary School.

“All the mentioned steps were after the district tried to transfer and replace the teachers hoping that they were the problem as some people had earlier claimed. The district engaged the Ministry of Public Service, Ministry of Local Government and the Ministry of Education on the matter,” He added.

Nakaseke Resident District Commissioner, Mr Fred Bamwine in when contacted said the news about the closure of a public school is unfortunate.

“I have heard about this particular incident, but will have to get full detail on what transpired,” he said.

The district is still struggling to have nine primary schools coded by the government. The schools that started as community supported schools within the cattle corridor areas were later taken on by Save the Children in 2005 in partnership with the parents. Save the Children in 2018 handed over the schools to Nakaseke District Local Government after winding up its activities in Nakaseke.

Windows 11 users could be set for a significant security upgrade

Youth in Katwe to receive training in street art