However, that joy was short-lived when it turned out that Herman Waiswa and Bright Tenywa were blind. “At four weeks, I took them to hospital and was told that they have no eyeballs,” Mr Irongo said

Last year, Blessing Uganda Foundation, a Community Based Organisation in Jinja City, visited the family and enrolled the twins at St Francis School for the Blind, Madera in Soroti City, and they were in Primary One by the time the Covid-19 pandemic struck.

The same organisation delivered mattresses and clothing to Mr Irongo and educated him on better agricultural practices, which has seen him flourish by growing tomatoes, eggplants and greens on an acre, most of which he sells at Amber Court market in Jinja City.

Mr Joseph Garssia Ojatum, the founder of Blessing Uganda Foundation, said they realised that Mr Irongo is good at farming and want to improve on it and turn him into a modern farmer and use him to involve others.

“We have discovered that agriculture is the way for him to go so that he can take care of himself and his family even if we are not there as a charity. If it means hiring a garden for him each season to cultivate more, we shall do it,” Mr Ojatum said.
According to Mr Irongo, immediately the twins were delivered and it was discovered that they were both blind, he started noticing an unusual withdrawal of residents from him, with some parents telling their children not to play with his kids or visit his home.

“Some residents comforted me by saying: ‘All children are from God and He has a purpose’, but those who ridiculed me were the majority; so, I decided to go with the minority and I am looking after them until God decides otherwise,” Mr Irongo added.

To the residents, Mr Irongo had inherited ‘problems’ and was destined for failure, both as a father and as a resident, but says he was pushed to work hard because of the twins. “Before the twins’ arrival, I was dejected and was living in a mud and wattle house with no toilet, but I decided to construct a better shelter. If it wasn’t for them, I wouldn’t have put up a better house,” Mr Irongo said. 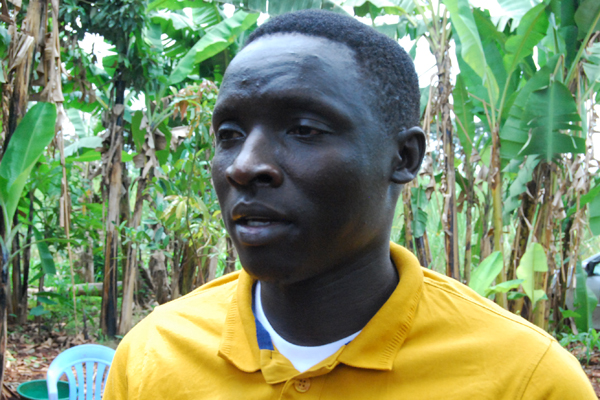 When Daily Monitor visited the family, Irongo’s 29-year-old wife, Ms Scovia Kikwida, was not around as she had reportedly gone to attend a burial of a relative.
Mr Saul Lwamboga, a neighbour, however, said he is grateful to God for the twins, adding that they have exposed Irongo’s ‘true’ neighbours and friends.

“In Busoga culture, giving birth to blind children is seen as a ‘problem’, so, while the Village sees them as a problem, we are grateful to God for such a blessing,” Mr Lwamboga said.
He added: “Because of his blind children, he has been greatly ridiculed, and with no school for the blind in the entire Budondo, it was clear that the twins would never get any formal education.”

“Ever since the schools closed, I have seen a change in them; for example, I can send any of them for something inside the house and it is delivered. Their cognitive processes are good,” Mr Lwamboga added.

According to Mr Lwamboga, the twins’ relationship with other children in the neighbourhood and their parents has also improved.

Sex tape: Be careful who you experiment with –Victoria Inyama warns

Partner sessions are going all out at TC Sessions: SaaS 2021 – TechCrunch