A woman in Bihar allegedly murdered her husband with the help of her paramour, and then tried to destroy the evidence by dismembering the body and pouring chemicals on it. A chemical explosion alerted the police about the crime.

The incident took place in Sikandarpur Nagar Police station area of Muzaffarpur, where 30-year-old Rakesh was allegedly murdered by his wife Radha, paramour Subhash, Radha’s sister Krishna and her husband.

To get rid of the dead body, Subhash allegedly cut the body into several pieces. Afterwards, Subhash and Radha tried to use chemical to smelt the corpse inside a rented flat. The use of chemicals caused an explosion, after which the local residents informed the police.

When the police reached the spot, they saw scattered pieces of a dead body inside the flat. The police then sent the body for post-mortem and a forensic team started investigating the matter.

Sikandarpur Police reached the spot after the local residents alerted them about the chemical blast.

During the investigation, the body was identified as Rakesh, a resident of Sikanderpur, who was Radha’s husband.

Since the deceased Rakesh was involved in illegal liquor business even after prohibition of alcohol in Bihar, he was on the radar of the police. Because of this, Rakesh used to live here and there in secret most of the time.

During this time, Rakesh’s partner, Subhash, used to look after his wife and after some time both of them fell in love with each other.

Afterwards, Radha, along with her paramour, reportedly decided to remove Rakesh from the path, in which her sister and her sister’s husband also joined.

Radha allegedly called Rakesh home on the occasion of Teej, and then murdered him with Subhash’s help.

After Rakesh’s murder, his brother Dinesh Sahni lodged an FIR in the police station, accusing Radha, her lover Subhash, sister Krishna and Krishna’s husband of murder. Dinesh Sahni claimed that his elder brother’s wife had an illicit relationship with his aide Subhash.

Rakesh’s brother alleged that the entire society was aware of the illicit relationship between Subhash and Radha. According to Dinesh’s statement, Rakesh had returned to his house a few days ago and was living in a rented house.

Dinesh said that he reached the spot after he learnt of a sudden explosion in the house on Saturday. Later, he found out that his brother had been murdered and his body was cut into pieces. 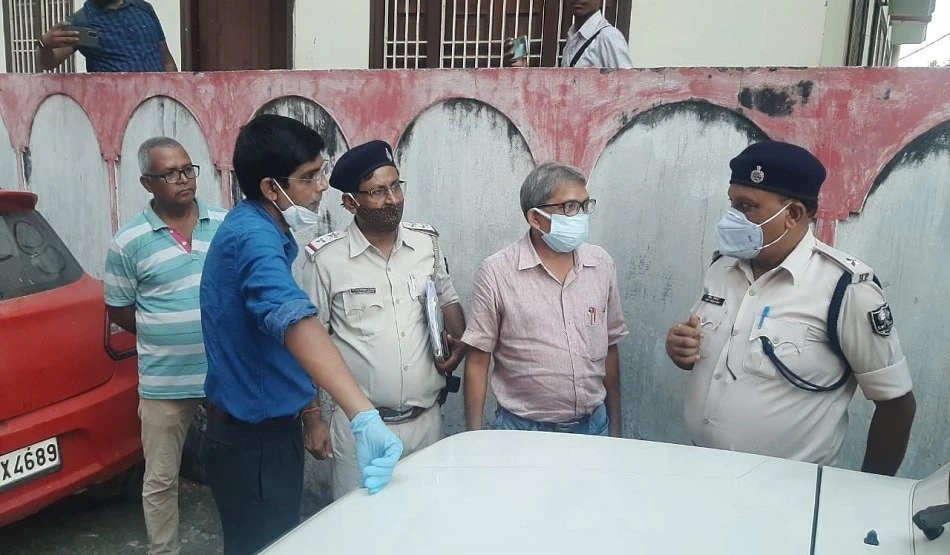 Sikandarpur Police found scattered pieces of a corpse inside a flat when they reached to investigate the chemical blast.

Sikanderpur Police station in-charge Harendra Tiwari said that a case of murder has been registered against the wife of the deceased, his sister-in-law, sister-in-law’s husband and the woman’s paramour Subhash.