Less than a month since she quit the Congress and joined the TMC, Sushmita Dev has been nominated to the Rajya Sabha.

The Trinamool Congress has nominated Sushmita Dev to the Rajya Sabha less than a month after the former MP from Assam’s Silchar left the Congress to join the party of West Bengal CM Mamata Banerjee. At the time of joining the TMC, Sushmita Dev said she was “beginning a new chapter of public service”.

Sushmita Dev has been camping in Agartala where the TMC is planning to mount an opposition to the ruling BJP, according to reports.

In a tweet on Tuesday, the TMC’s official handle said, “We are extremely pleased to nominate @SushmitaDevAITC to the Upper House of Parliament.”

Thanking the TMC for giving her the opportunity, Sushmita Dev reacted on Twitter: “I am overwhelmed. I Thank my leader @MamataOfficial from the bottom of my heart. Her conviction to see more women in parliament is exemplary. I will do my very best.” 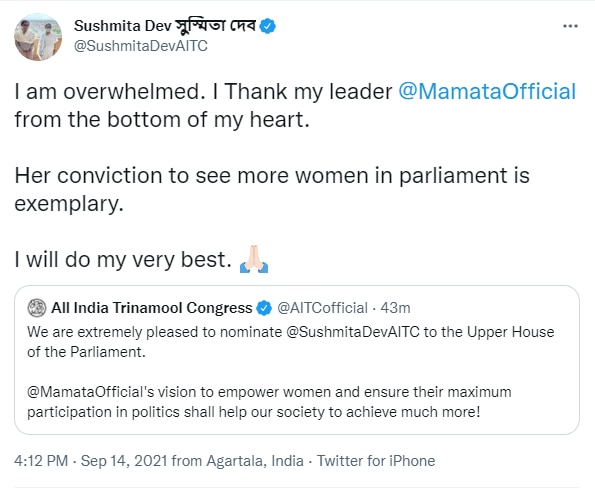 The daughter of former union minister late Santosh Mohan Dev and former MLA Bithika Dev, Sushmita Dev is a former Lok Sabha MP from Assam’s Silchar. She lost to Rajdeep Roy of the BJP in Silchar in the Assam Assembly polls held earlier this year.

Dev was also president of the All India Mahila Congress before she resigned from the party and joined the TMC in the presence of party general secretary Abhishek Banerjee.

What led to Rajya Sabha bypoll?

In West Bengal, the resignation of TMC MP Manas Ranjan Bhunia led to a vacancy in the Upper House of Parliament. Bhunia was later sworn in as a minister in CM Mamata Banerjee’s cabinet.

As per a notification issued by the Election Commission of India (ECI), bye-elections for seven vacant Rajya Sabha seats are to be held on October 4. These include two vacant seats in Tamil Nadu and one each in West Bengal, Assam, Maharashtra, Madhya Pradesh and Puducherry.