Parliament is engaging the offices of the Accountant General and the Attorney General to swiftly act on the bank accounts of the Rebecca Alitwala Kadaga Institute of Parliamentary Studies (RAKIPS) and later deal with law responsible for its existence.

The above development is conspicuously captured in the letter of indefinite suspension of all the activities of the institute, which was sent out to the respective recipients on Monday.

ChimpReports on Monday exclusively reported on the letter that unilaterally, without the input of the Parliamentary Commission, halted the operations of the institute named after the immediate former Speaker, and again without a prior warning or hearing from its management.

Clerk to Parliament, Adolf Mwesige said the suspension is based on the “reliable” information he received regarding the “irregularities and illegalities” in the management of funds at RAKIPS.

“I have reliably received information to the effect that money disbursed to RAKIPS in form of subvention (government money) is being managed in an illegal and irregular manner,” he conclusively stated in the letter sent to RAKIPS Executive Director.

The same letter says Accountant General, Lawrence Semakula has already been asked to immediately check on the propriety of the bank accounts of RAKIPS.

“I have initiated consultations with the Accountant General to advise on the propriety and mode of expenditure of public funds allocated to RAKIPS,” he said.

The Clerk also said that he has sought the intervention of the Attorney General to harmonize the allegedly conflicting laws: institute of Parliamentary Studies Act of 2017 and the Public Finance Management Act of 2015. The question of the legality of expenditure of RAKIPS is coming after one year and five months since President Yoweri Museveni assented to its establishment on April 23, 2020. 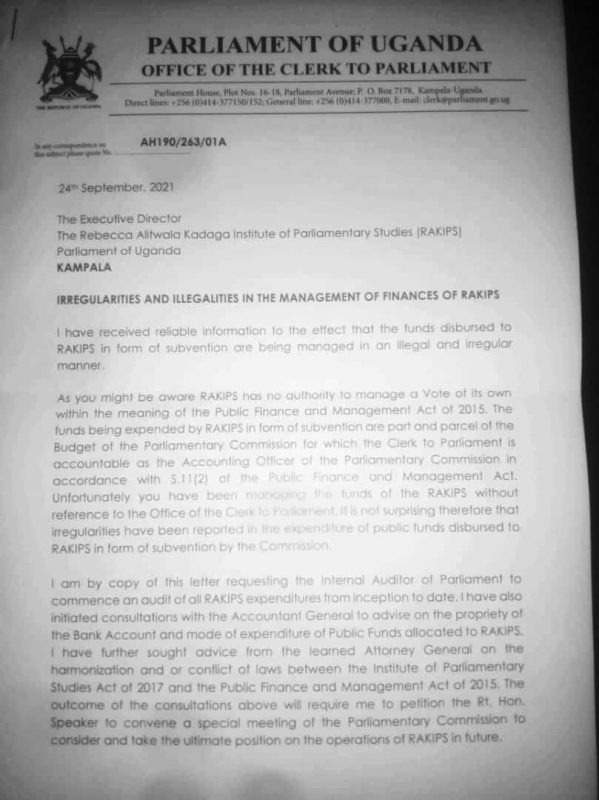 When contacted on phone, the Accountant General, Lawrence Semakula said he is yet to receive the official communication from Parliament and advise as it’s requested.

“We are yet to receive the letter from Parliament and we shall offer our advise. It is however on the shoulders of Parliament to take action or initiate one on any of its votes,” said Semakula. 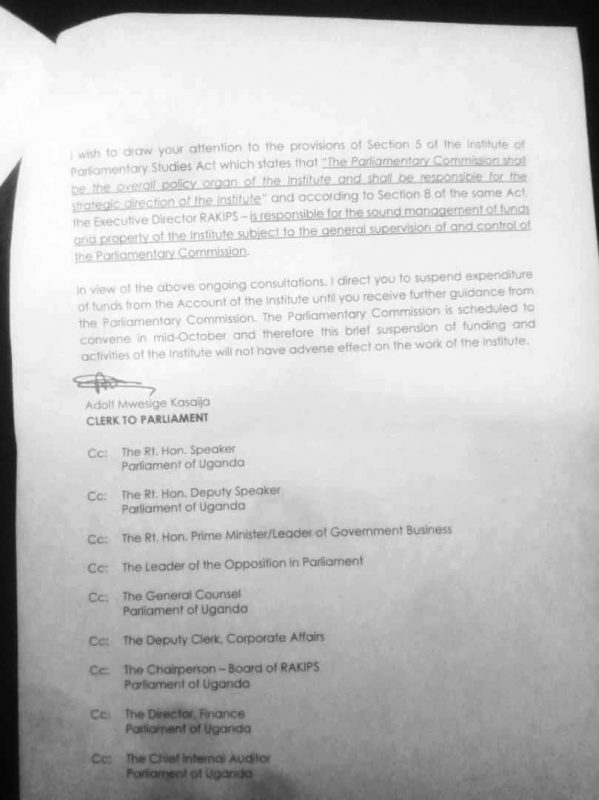 According to multiple sources from Parliament, the Institute will not receive any money starting from yesterday, September 27, 2021, and be rendered irrelevant before it is changed through the amendment of its 2020 establishing law or its activities will be transferred to other departments.

“Suspension is just the beginning. The face of RAKIPS is going to be changed and potentially even the name,” said a source.

This website understands that RAKIPS was meant to conduct the induction of Members of Parliament starting on Friday last week but it was surprisingly postponed to Monday this week, in an announcement by the Speaker Jacob Oulanyah.

Few minutes after Oulanyah’s announcement, another letter came canceling the rescheduled Monday event, ironically undoing the statement by the head of the house.

A decision had already been taken to suspend RAKIPS before Oulanyah made his announcement, as per the knowledgeable sources.

“The letter to suspend RAKIPS was ready on September 24, 2021, the very day the Speaker made the rescheduling announcement. Obviously, he knew everything,” said a source.

According to Chris Obore, the Parliament Director Communications and Public Affairs, the move is to avoid the creation of two accounting officers in the Legislature.

RAKIPS is a one-stop specialized resource centre for the training and capacity development of Members and Staff of Parliament of Uganda, Local Councils and other Legislatures within the region. It was established on April 23, 2020, the day President Museveni assented to its Bill.

IPL 2021: Always had the confidence to deliver with ball, says Venkatesh Iyer after KKR outclass DC