Here’s everything Amazon announced this morning, from smart thermostats to security robots – TechCrunch


Amazon held an event this morning, and wow-oh-wow did they announce a lot. Smart thermostats! Flying security cameras! Robot companions!

Didn’t tune in or have time to catch it all? Here’s a recap of the biggest news:

Amazon is building a thermostat, partnering with Honeywell to get it done. It’ll be Alexa-compatible, of course, allowing you to say things like “Alexa, turn off the AC.” At just $60 (about half the cost of cheapest Nest), they’re definitely aiming to undercut the market here. 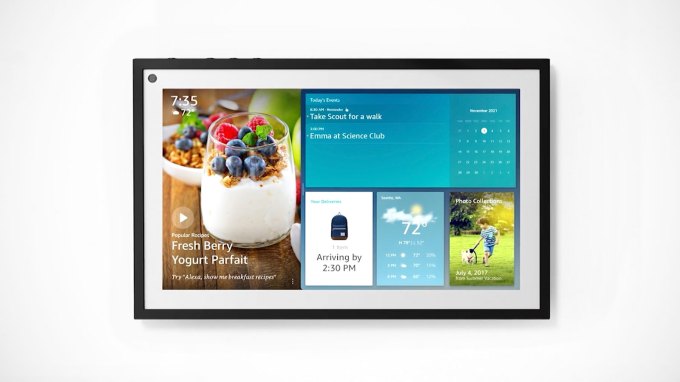 A wall-mountable Echo Show that looks like a framed picture, meant to sort of just blend into the room while providing one-tap access to things like reminders, calendars, and security camera views. Works in portrait or landscape made. It’ll cost $250

You’ll now be able to teach Alexa to recognize new sounds and perform actions when it hears them. The example given was teaching Alexa to recognize the beeping sound your fridge makes when it’s left open and send you a notification. 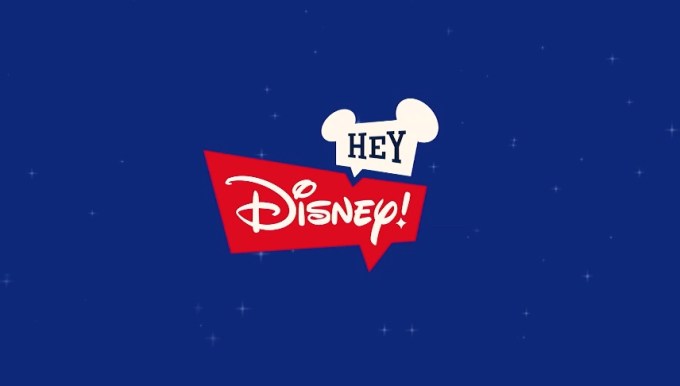 Amazon’s voice assistant tech is coming to “tens of thousands” of Walt Disney World Resort hotel rooms, allowing guests to say “Hey Disney” and ask about things like when the park opens, when the next shuttle will arrive, or request towels. Because if there’s one thing people love in their hotel rooms, it’s microphones. Right? Anyone? 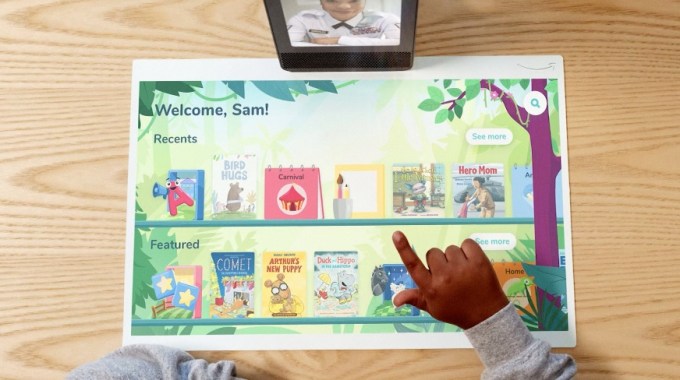 Leaning hard into the “video calling with the grandparents” part of the pandemic, Amazon is building an interactive tablet/projector thing for kids and families. The 8″ screen connects the kid with a remote family member, while a built-in projector beams a game onto the touch-sensitive surface in front of it. The family member on the other end of the video call can play along while they chat, interacting with the game via tablet. Amazon is working on games in partnership with Disney, Mattel, and Nickelodeon. The “early access price” will be $250, but no word of what it’ll cost after that. 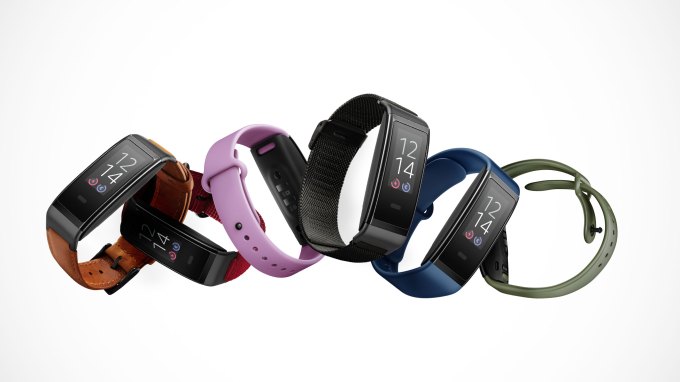 Amazon dives deeper into the exercise/health space, this time launching a waterproof, $80 Fitbit-style wristband with a built-in display. It’ll also launch Halo Fitness, a collection of hundreds of streamable video workouts, and Halo Nutrition, which is meant to help with meal planning and grocery shopping. 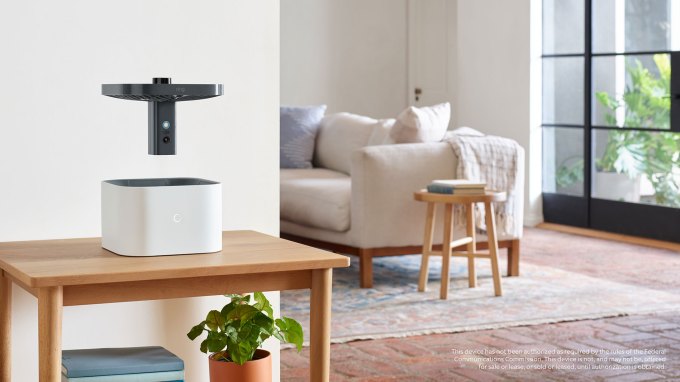 Remember that wild drone camera that Ring announced last year? The one that flies around your house to record footage while you’re away? They initially didn’t announce when it would actually be available (presumably because they wanted to wait until everyone got their Half-Life references out of the way,) but the company says it’s going up for purchase now on an invite-only basis.

Ring will launch a subscription monitoring service for their doorbells and outdoor cameras; once you’ve given them access to a specific camera, Ring’s “Virtual Security Guard agents” can respond to alerts by tuning into the live feed, communicating with anyone they see, triggering the on-device siren, or calling emergency services. 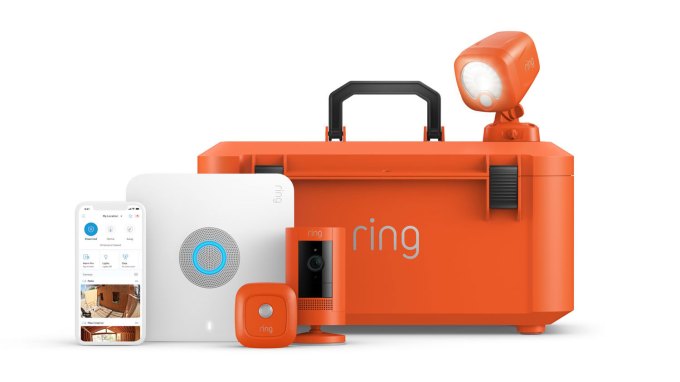 Ring is also building a special kit of hardware purpose-tuned for construction and contractor job sites; it can help do things like monitor if gates are open/closed, and comes in a fancy hardcase for moving the system from site to site. And it’s all orange, because construction! 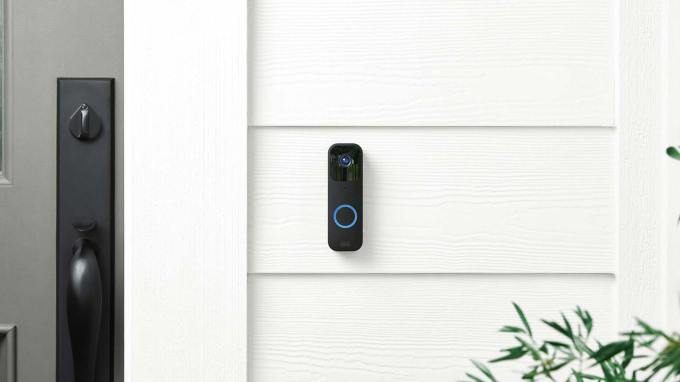 Amazon acquired Blink in 2017. Rather than merging it into Ring, Blink lives on as the generally more affordable line. This morning they announced a $50 smart doorbell with 1080p video and two years of battery life, a $140 outdoor floodlight security camera, and an optional $40 solar panel add-on for said floodlight. 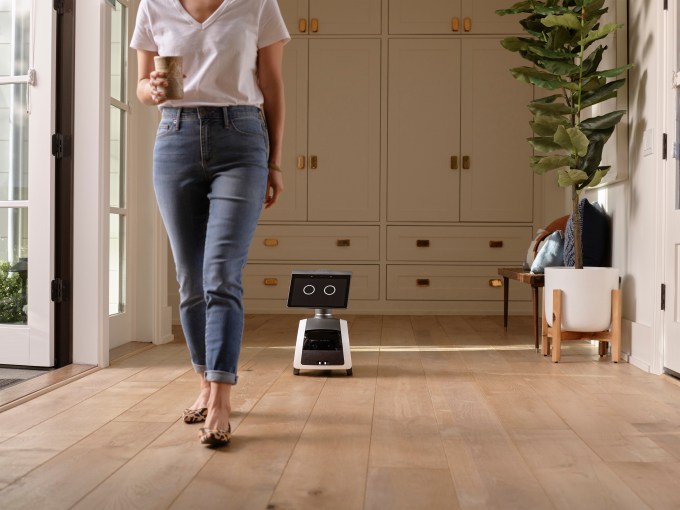 Amazon is making a $999 robot that will roll around your house like a little Alexa-powered Wall-E. From house mapping to security capabilities, there’s a whole lot going on here, so you should probably check out Brian Heater’s deep dive here.

Halle Berry says directing ‘Bruised’ has been her greatest achievement