One of the placards seen at the demonstration read: “Get Well Soon Kapil Sibal”.

Speaking to India Today, one of the demonstrators said, “Kapil Sibal should resign from the Congress.”

“Kapil Sibal has lost his mental balance. We are hoping that he regains it soon,” said another Congress worker.

Addressing a press conference on Wednesday, Kapil Sibal had criticised the manner in which the party’s high command is leading the party. “In our party, there is no president. So we do not know who is taking these decisions. We know and yet we do not know,” Sibal told reporters.

Srinivas BV, president of the Youth Congress, also took to Twitter to criticise Kapil Sibal over his criticism of the party’s central leadership.

“The party president [Sonia Gandhi] and guidance is the same that has always sent you to Parliament,” Srinivas wrote. He added that the Congress party made Sibal a minister when it was in power and nominated him to the Rajya Sabha when it is in Opposition. 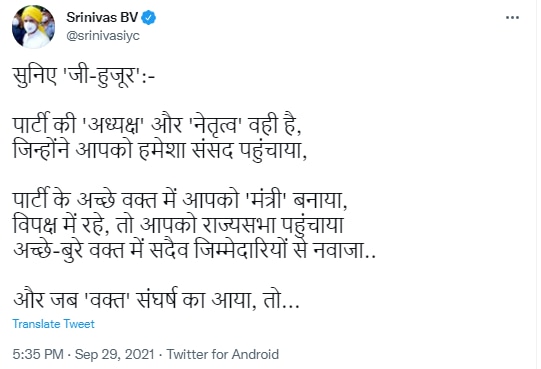 Reacting to Sibal’s press conference, Congress leader Ajay Maken also criticised the veteran party leader and requested him not to “degrade” the organisation that gave him an identity.

“Sonia Gandhi ji had ensured that Kapil Sibal becomes a minister in Union Cabinet despite not having organisational background. Everyone in the party is being heard,” Ajay Maken was quoted as saying.

Kapil Sibal is a part of the G23 faction of the Congress party which has been demanding the appointment of a full-time party president and internal elections within the Congress.

Former Rajya Sabha Leader of Opposition (LoP) Ghulam Nabi Azad, who is also a part of the G23, wrote to Congress interim president Sonia Gandhi on Wednesday asking her to convene an urgent meeting of the Congress Working Committee (CWC).