by FASTOBSERVER
in India Today
0


India’s fantastic run in international sport continues with Jehan Daruvala winning his second FIA Formula 2 Championship race at Monza. Jehan started second, and completely dominated the grid from lap 1 to win by a massive margin at the Italian Grand Prix last weekend. However, Jehan missed out on another podium, settling for P5 in the feature race on Sunday. In the sprint race 2 on Saturday, Red Bull Racing Junior started on the front row behind German racer David Beckman.

As the lights went out, Jehan had an excellent start. He braked really late to make an excellent move into the first corner. An incident behind resulted in a Virtual Safety Car situation. The moment racing resumed, Jehan put his head down and drove a clean, consistent race. The first few laps had Beckman within DRS range, but Jehan kept his cool and slowly inched away, opening a 1 second margin. Once Beckman was out of DRS range, Jehan steadily increased his lead every lap.

The first few laps had Beckman within DRS range, but Jehan kept his cool and slowly inched away, opening a 1 second margin.

Jehan’s dominance meant he won the race by over six seconds, ahead of Viscaal and Shwartzman. This was Jehan’s third podium of the season and second Formula 2 victory after he became the first ever Indian to win a Formula 2 race last year at the Sakhir Grand Prix weekend.

After the win, Jehan said, “It feels truly special to hear the Indian national anthem on the top step of the podium. Winning at Monza is every racer’s dream. I had qualified well and knew I had the pace to win. Getting ahead of David at the start and then breaking the tow were critical moments in the race. A big thanks to Carlin for the great car.”

Jehan’s fantastic performance in qualifying saw him qualify second, just 0.04 seconds shy of the pole. In the feature race, Oscar Piastri clinched a dominant win, beating Guanyu Zhou to extend his Championship lead. The duo sparred a late battle with the rapid Dan Ticktum on fresh soft tyres as the race ended under Safety Car conditions, with the Carlin in P3. Piastri had been unable to convert pole in the previous round at Silverstone, losing out to Zhou when the lights went out, but looked to have learned from the experience and completed the opening lap at the front. Jumping from P3 to P2 off the line, Zhou kept the pressure on throughout the race but was unable to find a way past his title rival. 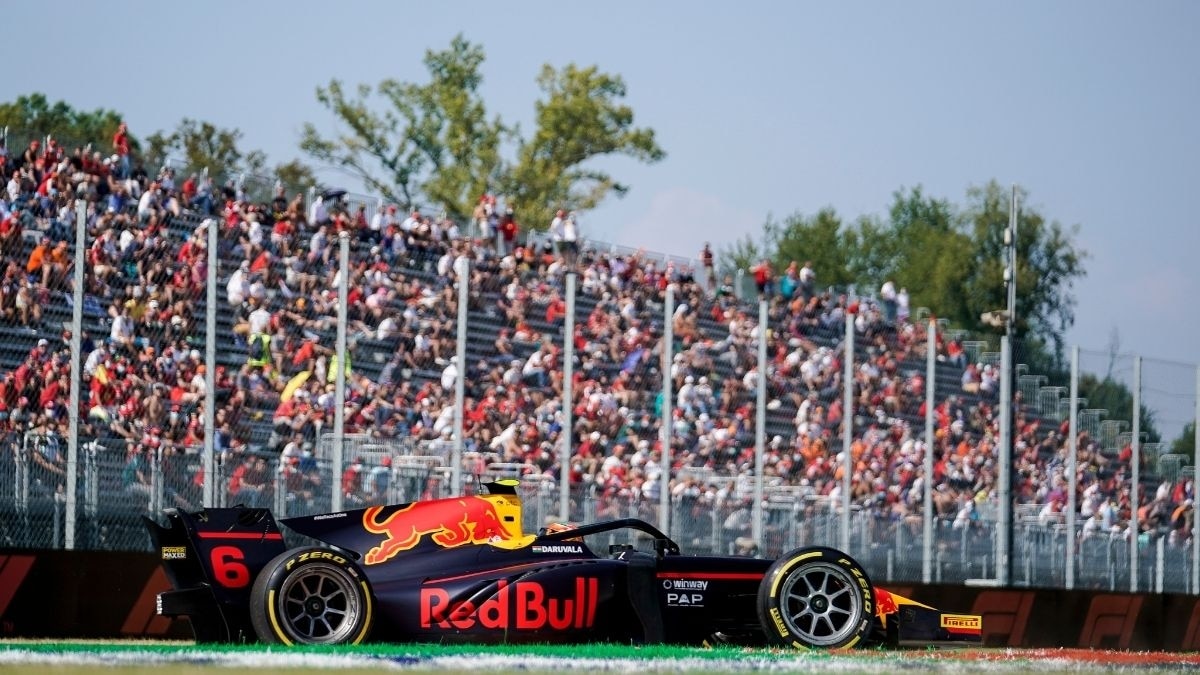 Jehan’s dominance meant he won the race by over six seconds, ahead of Viscaal and Shwartzman.

Piastri enjoyed a strong getaway from pole, but Daruvala was sluggish from second and got mugged by both Zhou and Liam Lawson. The field wasn’t able to all make it through to the second lap as Guilherme Samaia spun to a stop at the back and brought out a Safety Car. Action resumed with 25 of the 30 laps to go and Piastri darted back off into the distance, as Lawson sprung an eye-catching move on Zhou at the chicane to steal second from the unsuspecting UNI-Virtuosi racer. Lawson lost track position in the pits, returning ninth, behind Piastri, Zhou and Daruvala. The Virtuosi and the Carlin started squabbling when racing resumed, with both drivers forced to cut the chicane on successive laps and arguing on the radio that they were forced wide. The stewards took a look but decided that it was six of one, half a dozen of the other.

Pourchaire robbed Lawson of sixth and pulled up into the rear-view mirror of Daruvala. The Carlin driver held him off for several laps but eventually surrendered the position with eight laps to go. Pourchaire and Daruvala completed the top five, followed by Shwartzman, Verschoor and Zendeli. Nissany and Marcus Armstrong claimed the final points, in ninth and 10th.

Piastri now holds a 15-point advantage over Zhou with three rounds of the season to go, sitting first with 149 points. Shwartzman is third with 113, ahead of Ticktum on 104 and Pourchaire on 94. In the teams’ title race, PREMA have 262, ahead of UNI-Virtuosi on 193 and Carlin on 185. Hitech are fourth with 162 and ART fifth with 132. The title fight will continue in just under two weeks in Sochi, where Piastri and Zhou will look to pick up their battle from the front. 42-day ban on sports, concerts ends: What next?