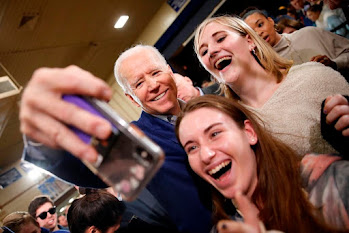 What is this new phrase that has become a movement? “Settle for Biden“.

Over 330 TikTok creators are members of the TikTok for Biden group, including video blogger Hank Green, Meena Harris, who is Sen. Kamala Harris’ niece, and Claudia Conway, daughter of Trump advisor Kellyanne Conway. The group has more than 778,000 followers on TikTok. But many of the creators that are a part of the group have their own viral followings. For example, Green and Claudia Conway each have more than 1 million followers on their own accounts.

In contrast, TikTok for Trump has 14,700 followers and more than 100 creators are a part of that group.

“We are not as much of a persuasion group as we are a mobilization group,” Kohn-Murphy said, adding that many followers of TikTok for Biden aren’t swing voters or Republicans, but “young people who are to the left” who don’t have information on how to be involved in the election.

“There’s nothing that’s actively motivating a lot of people, and we’re trying to give them something to motivate them,” he said.

After the election is over, Weinberg, founder of Settle for Biden, said he isn’t going to stop organizing.

He is planning to transition the group into a new name and streamline the group’s efforts “for the next four years and hopefully beyond that.” But right now, “we’re working as hard as we can to ensure a Biden victory,” he said.

The former vice president, who ran in the Democratic primary on a centrist platform, was not the first, or even second, choice for many young and progressive voters. Sen. Bernie Sanders, who garnered a large following after his 2016 presidential run, and Sen. Elizabeth Warren carried that mantle.

But after Warren and Sanders left the campaign in March, it became clear to 19-year-old Samuel Weinberg he needed to do something to drum up support for a candidate he wasn’t initially thrilled to back.