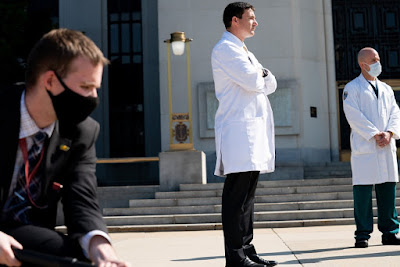 President Trump’s doctor said in a memo released Saturday night that he was “no longer considered a transmission risk to others,” as the president prepared to resume campaign activities this week.

The memo from Dr. Sean P. Conley, the White House physician, said he was releasing information with Mr. Trump’s permission. But the amount of information he provided was limited, in keeping with restrictive presentations to the public that Dr. Conley has made throughout Mr. Trump’s battle with symptoms of the coronavirus since officials made his diagnosis public early on Oct.

Experts have repeatedly called into question the true severity of Mr. Trump’s illness. According to guidelines released by the Centers for Disease Control and Prevention, people with severe Covid-19, the disease caused by the coronavirus, may need to isolate for up to 20 days. And the president’s health could still deteriorate in the next few days.

“I don’t think he’s out of the woods for certain,” said Dr. Krutika Kuppalli, an infectious disease physician based in South Carolina. Men of Mr. Trump’s age, 74, and weight are at higher risk for severe cases of Covid-19. His recent course of steroids, which suppress certain parts of the immune system, could also make him vulnerable to other infections, Dr. Kuppalli added. “I would still be careful with someone like him.”

The start date of Mr. Trump’s symptoms has also remained unclear. By Dr. Conley’s assessment, Mr. Trump would have needed to show signs of his illness on Wednesday, Sept. 30, for Saturday to qualify as 10 days after the onset of symptoms. Most people stop being infectious by the 10th day after they start feeling ill, according to the C.D.C.

“This evening I am happy to report that in addition to the president meeting C.D.C. criteria for the safe discontinuation of isolation, this morning’s Covid P.C.R. sample demonstrates, by currently recognized standards, he is no longer considered a transmission risk to others,” Dr. Conley wrote. “Now at day 10 from symptoms onset, fever-free for well over 24 hours and all symptoms improved, the assortment of advanced diagnostic tests obtained reveal there is no longer evidence of actively replicating virus. In addition, sequential testing throughout his illness has demonstrated decreasing viral loads that correlate with increasing cycle threshold times, as well as decreasing and now undetectable subgenomic mRNA.”

Several experts expressed skepticism at the wording describing Mr. Trump’s diagnostic tests, which did not explicitly categorize the president as “negative” for the coronavirus. P.C.R., a laboratory technique that detects the virus’s genetic material, can give researchers a rough sense of how much virus remains within a person’s body, or the viral load. Dr. Conley’s note suggested Mr. Trump’s viral load was dropping, but appeared to still be detectable.

The subgenomic mRNA mentioned by Dr. Conley is a part of the virus that can be detected by laboratory techniques, and that suggests the presence of actively replicating virus, said Susan Butler-Wu, a clinical microbiologist at the University of Southern California. But “there are zero cleared tests that look at subgenomic mRNA” from the coronavirus, she added, which means the procedure is “experimental at this point.”

Another, more traditional, approach to determine whether Mr. Trump still harbored actively replicating virus in his body might be to take a sample from the president’s airway and see if the coronavirus could be grown from the sample in a lab. But this technique was not mentioned in Dr. Conley’s memo.

There is also no test that can definitively show if a person at the end of a coronavirus infection is still contagious and poses a risk to others, said Melissa Miller, a clinical microbiologist at the University of North Carolina School of Medicine.

Dr. Conley said he would continue to monitor the president in the coming days.

Mr. Trump is to speak at a campaign event on Monday.

Mr. Trump’s voice has grown stronger since he was released from Walter Reed National Military Medical Center on Monday. But other than on his trips to and from the hospital, he had not been seen in public before Saturday, when he appeared on a balcony for nearly 20 minutes before a crowd of a few hundred people gathered on the South Lawn of the White House.