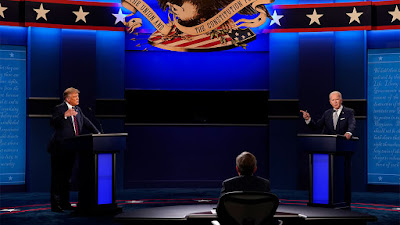 In an article published on October 23, 2020, Jennifer Agiesta, CNN Polling Director says Joe Biden did a better job in the final debate on Thursday, according to a CNN Instant Poll of debate watchers. Overall, 53% of voters who watched the debate said that Biden won the matchup, while 39% said that President Donald Trump did.

Viewers once again said that Biden’s criticisms of Trump were largely fair (73% said they were fair, 26% unfair), and they split over whether Trump’s attacks on Biden were fair (50% said yes, 49% no).
That’s a more positive outcome for Trump. In a CNN Instant Poll after the first presidential debate, just 28% said they thought the President had won the debate, and 67% called his criticism of Biden unfair.
All told, though, the debate did not do much to move impressions of either candidate. Favorable views of Biden before the debate stood at 55%, and they held steady at 56% in post-debate interviews. Likewise, Trump’s numbers held steady, with 42% saying they had a favorable view of the President in interviews conducted before Thursday’s debate and 41% saying the same afterward.
More debate watchers, though, said Trump’s performance raised concerns about how he would handle the presidency (55%) than did Biden’s (41%).
Thursday’s debate watchers preferred Trump over Biden on the economy (56% say they think Trump would better handle it vs. 44% who say Biden would), and divided about evenly between the two on foreign policy (50% prefer Biden, 48% Trump). Biden held a wide edge as more trusted to handle the coronavirus (57% Biden to 41% Trump), climate change (67% Biden to 29% Trump) and racial inequality in the US (62% Biden to 35% Trump).
Biden was also largely seen as offering a better plan for solving the country’s problems (54% Biden to 42% Trump), and voters split over who seemed to be the stronger leader (49% each).
Although Thursday’s event was far less contentious than the first presidential debate, Biden was far more apt to be seen as directly answering the moderator’s questions (62% said he did, 31% said Trump).
Women were more likely than men to say that Biden did the better job in the debate (60% of women said Biden won, 35% Trump, while among men, 47% said Biden won, 44% said Trump did). Independents also largely felt Biden won (55% Biden to 36% Trump), as did moderates (56% Biden to 37% Trump) and White voters with college degrees (64% Biden to 29% Trump). Among those 65 and older — a group backing Biden in greater numbers than they did Hillary Clinton in 2016, according to most polls — the verdict was a split decision, with 46% saying Biden won, 43% Trump and 10% saying they both did equally well. Younger voters broadly saw Biden as the winner, 66%, to 27% for Trump among those under age 45.
Biden’s margin over Trump in this post-debate poll is just 1 point wider than Clinton’s win over Trump in a poll of viewers of the final debate in 2016. Biden’s margin is the second largest in recent CNN polling following final presidential debates, behind Barack Obama’s 58% to 31% margin over John McCain after the final 2008 debate.
The CNN post-debate poll was conducted by SSRS by telephone and includes interviews with 585 registered voters who watched the October 22 presidential debate. Results among debate-watchers have a margin of sampling error of plus or minus 5.7 percentage points. Respondents were originally interviewed earlier this month either by telephone or online, and indicated they planned to watch the debate and would be willing to be re-interviewed when it was over. Respondents initially reached online are members of the SSRS Opinion Panel, a nationally representative probability-based panel.

Youth in Katwe to receive training in street art