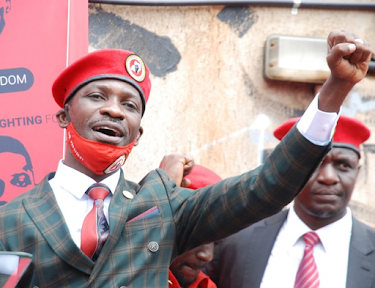 Ugandan security forces have detained presidential hopeful Bobi Wine on Wednesday during a raid of the campaign headquarters of his newly formed party, according to his lawyer.

The pop star-turned-politician, whose real name is Robert Kyagulanyi Ssentamu, has previously been arrested numerous times as he has rattled the governing party of President Yoweri Museveni, who has ruled the East African nation since 1986.

Bobi Wine’s lawyer Anthony Wameli said his client was seized on Wednesday at the Kampala offices of his opposition party, the National Unity Platform (NUP).

“The police and the army raided the office of NUP, sealed off the premises and all the roads leading to the place before detaining Bobi Wine and other party officials,” Wameli told the AFP news agency.

“This is despicable and an attack on democracy by the partisan police and the army,” he said. The reason for the raid was unknown but “politics cannot be ruled out”, he added.

Earlier, Bobi Wine had said in a Twitter post police and military officers raided the offices of his party, decrying what he described as the securities agencies’ “stinking” partnership with the establishment in the lead-up to general elections set for 2021.

“The military and police just raided our head office in Kamwokya,” he said, referring to an area in the capital, Kampala. “They have broken into offices and taken away valuable documents and other items. Some comrades have been injured. The partisanship of security agencies ahead of the election is stinking,” he said.

Bobi Wine was meeting other NUP leaders when the police swooped in and cordoned off the area, according to party official David Lewis Rubongoya.

Rubongoya, who was at the scene, told The Associated Press news agency that the security officers confiscated items such as security cameras and supplies of red berets that are symbols of Wine’s popular campaign.

“They have taken away everything,” he said.

Bobi Wine has captured the imagination of many young Ugandans with his persistent calls for President Yoweri Museveni to retire. Since he expressed his presidential ambition, police and the military have repeatedly dispersed his rallies and beaten and detained his supporters.

Museveni, 76, has ruled Uganda since taking power by force in 1986. Critics accuse him of relying on the armed forces to stay in power. He is able to seek another term after the legislature voted to remove constitutional age limits on the presidency.

Museveni accuses Bobi Wine of encouraging young people to riot and has charged that people associated with him are “a misguided group being used by some foreigners to destabilise” Uganda.

There was no immediate comment by the security agencies.

Students At An Ivy League Business School Thought $100,000 Was The Average American Salary. The Internet Was Not Having It.