Trump to rejoin the campaign trail despite scant health details. 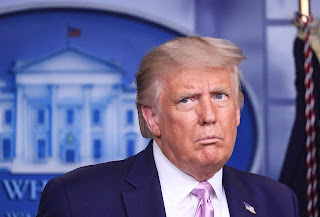 President Donald Trump appears poised to end his Covid isolation and emerge onto the campaign trail despite little clarity about his condition, no independent view of his physical state and warnings from health experts he is likely still shedding the virus.

Anguished over his badly weakened political standing weeks before the election, Trump has implored aides and his medical team to clear him for a return to campaigning. He said he was planning rallies as early as Saturday, though aides downplayed the prospect of arranging an event so quickly.

Inside the White House, Trump has veered wildly on issues like whether he will participate in the next presidential debate or whether he will negotiate with Democrats on another stimulus package.

It has lent the impression of a leader and an administration in new state of disarray, even for a tenure marked by chaos. Some of Trump’s aides have speculated his wild swings in temperament and head-spinning reversals are related to his medical condition, and specifically his use of dexamethasone, the steroid he had been taking as part of his treatment for coronavirus.

He’s been conducting most of his business by telephone as officials avoid coming into close contact with him. Those who have taken his calls uniformly described him as “upbeat,” though that has not been in evidence during his rage-filled interviews on Fox News and Fox Business, when he angrily tore into both his political rivals and the senior-most Cabinet members in his own administration.