Pop Francis says Homosexuals have a right to be a part of the family, he endorsed Same-sex civil unions 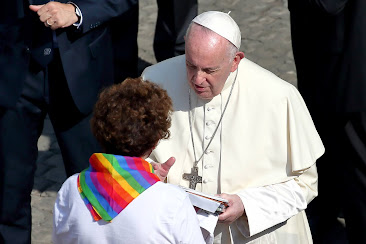 Special report by The Fast Observer

“Pope Francis, who since the beginning of his pontificate has taken a more tolerant  tone toward homosexuality, appeared to break with the position of the Roman Catholic Church by supporting civil unions for same-sex couples, according to remarks Francis made in a new documentary that debuted in Rome on Wednesday

In Pope Francis’s words,  “Homosexuals have a right to be a part of the family. They’re children of God and have a right to a family. Nobody should be thrown out, or be made miserable because of it.”

And when asked directly about civil unions, he endorsed them by saying “What we have to create is a civil union law. That way they are legally covered. I stood up for that.”