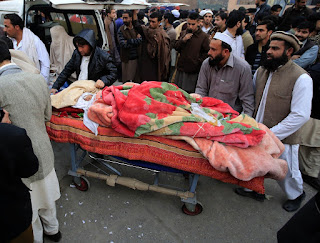 An attack targeting a military escort on Thursday has left at least 14 dead in Pakistan’s southwestern province of Balochistan, officials said.

The security detail was accompanying a convoy of the state-run Oil and Gas Development Corporation Limited (OGDCL) on a coastal highway traveling from the port town of Gwadar to the southern city of Karachi.
Seven soldiers and seven private security guards were killed in the attack, which was carried out by “a large number of terrorists,” the military said in a statement.
The surrounding area has been sealed off and a search is underway for the assailants.
An umbrella organization of Baloch militant groups, Baloch Raaji Aajoi Sangar (BRAS), has claimed responsibility for the attack. CNN cannot confirm the claim.
In a statement obtained by CNN, the alliance said that “companies like the OGDCL are exploiting Baloch resources in their strategy of extending the occupation of Balochistan.”
Balochistan has seen a decades-long insurgency by separatists who demand independence from Pakistan, citing what they say is the state’s monopoly and exploitation of the province’s mineral resources.
Calling for all operations to stop, BRAS said that it “completely rejects all Chinese agreements with the Pakistani occupying forces, and they stand null and void.”
In 2015, under Beijing’s Belt and Road trade and infrastructure scheme, China turned Gwadar into the deepest seaport in the world. The coastal town in Balochistan is now a hub of Chinese investment in Pakistan.
There is a heavy military presence in Gwadar and along the coastal belt in Balochistan, which links the port with a network of highways and railways.
This is the deadliest attack on the Pakistani military this year. In June, the Baloch Liberation Army, which is also affiliated with BRAS, carried out an attack on Pakistan’s largest stock exchange in Karachi, killing five people.
By: Correspondent