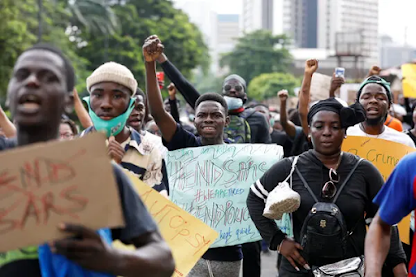 Nigeria’s leading celebrities and activists have organized mass protests across major cities in the country Friday demanding an end to police brutality in the country.

The nationwide protests were a culmination of weeks of anger and outcry online by the country’s young people over claims of kidnapping, harassment and extortion by a police unit known as the Special Anti Robbery Squad (SARS).

On Thursday, a protest was led in Lagos Island by Folarin Falana, a lawyer and singer, and Runtown, an artist known by that stage name.

Falana, who is popularly known as Falz, told THE FAST OBSERVER it was important for him to march because there have been “too many numerous incidents of harassment, extortion and police brutality,” in the country. He added that he, too, had been a victim of harassment at the hands of the Nigerian police.

“People have been posting online about it for years, but it has been the same sluggish attitude and response to it. Nothing has changed and people keep on being harassed. That’s why we have taken to the streets and we want the government to listen,” he said.

“I am marching for the ones that are not recognized. We are surprised by the numbers that came out and we are prepared to march again,” he added.

US elections: Trump in packed rally as his poll position goes down

US elections: Trump in packed rally as his poll position goes down

Algeria made history at Afcon, but not in the way it hoped — Quartz Africa