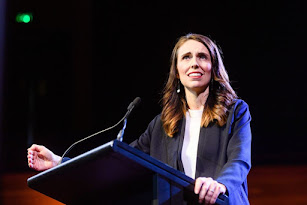 New Zealand Prime Minister Jacinda Ardern is poised for a big election victory on Saturday, buoyed by her successful handling of the coronavirus pandemic.

Ardern’s Labour Party had 46% support in an opinion poll published Friday in Wellington, while the main opposition National Party had 31%. With its ally the Green Party on 6%, Labour is on track for a comfortable majority in parliament.

New Zealand’s success in crushing community transmission of Covid-19 stands in stark contrast to countries like the U.K., U.S. and even neighboring Australia, where authorities are still battling to contain the virus. That hasn’t been lost on voters, who have mobbed Ardern on the campaign trail in a repeat of the “Jacinda-mania” that accompanied her rise to power three years ago.

“For so many voters it comes down to Ardern,” said Bryce Edwards, a political analyst at Victoria University in Wellington. “Her leadership during this crisis has led to what we’re seeing, which is a landslide for Labour.”

Polling stations in the nation of five million people close at 7 p.m. local time Saturday and a provisional result is due around midnight.

Ardern, 40, has captured the hallowed center ground in New Zealand politics with a blend of empathetic leadership and skilled crisis management that has also won her fame abroad. The pandemic has given her a stage on which to display those strengths, drowning out criticism that she hasn’t delivered on some key promises during her first term in office.

Ardern has put the government’s pandemic response at the forefront of her bid for a second term, urging voters to trust it to keep the virus out and navigate an economic recovery.

Both major parties are pledging massive spending on infrastructure to boost the economy. With government debt set to spiral, Labour would impose a higher tax rate on income over NZ$180,000 ($120,000) a year to raise more revenue.

In their final televised debate before the election, Ardern reminded viewers “how lucky we are” to be free of Covid-19 and asked for more time to enact change, while Collins warned of dark economic times ahead and appealed to undecided voters for their support.

The challenges ahead are enormous. The border remains closed to foreigners, crippling the key tourism industry, and unemployment is forecast to rise. But Collins, 61, hasn’t been able to gain traction with voters still focused on Ardern’s pandemic success.