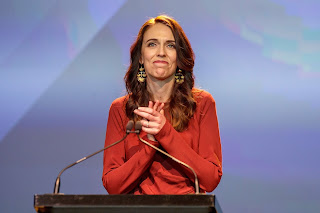 Jacinda Ardern has won a second term as New Zealand’s Prime Minister after her success at handling the country’s coronavirus outbreak helped secure a landslide victory.

Preliminary results show that Ardern’s center-left Labour Party has won 49% of the vote, meaning her party looks likely to score the highest result that any party has achieved since the current political system was introduced in 1996.
That result means her party is projected to win 64 out of 120 parliamentary seats, making it the first party to be able to govern alone under the current system. Coalitions are the norm in New Zealand, where no single party has won a majority of votes in the last 24 years.
“Tonight, New Zealand has shown the Labour Party its greatest support in at least 50 years,” Ardern said in a powerful victory speech on Saturday night where she referred to the difficult times ahead for New Zealand. “And I can promise you: we will be a party that governs for every New Zealander.”
Labour’s main opposition, the center-right National Party, won nearly 27% of the vote giving it 35 seats — down on last election’s 44% and the party’s worst result since 2002.
National leader Judith Collins said she called Ardern to concede defeat and congratulate her on an “outstanding result” for the Labour Party.
Final results will be released in three weeks once special votes — including those cast by New Zealanders living overseas — are counted. Those results could affect the final allocation of seats in parliament.
The preliminary count also shows a major swing to the left, with Labour picking up a significant boost on last election’s 37%, while its current coalition partner the Green Party won 8% — or 10 seats — up on last election’s 6%.
Ahead of the election, Victoria University politics lecturer Claire Timperley said Labour would be “foolish” not to have a conversation with the Greens about working together, even if Labour won an outright majority.
Labour’s other current coalition partner New Zealand First has not secured enough votes to make it back into parliament, while the right-wing ACT party won 10 seats with 8% of the vote, up on last election’s 0.5%.
Ardern’s reelection was buoyed by her “go hard and go early” approach to handling the coronavirus which has helped New Zealand avoid the devastating outbreaks seen elsewhere. The country was one of the first to close its borders, and Ardern announced a nationwide lockdown in March when it only had 102 cases.
New Zealand has reported fewer than 2,000 total cases and 25 deaths since the pandemic began.
Labour Party supporters watch results come in and wait for Jacinda Ardern to arrive during an election night event at Auckland Town Hall in Auckland, New Zealand, on October 17, 2020.
At the start of the year, polls suggested National and Labour could be in for a tight election. Ardern had huge international popularity, but back home some were disappointed by her lack of progress on key promises, including on addressing the overheated housing market.
But that all changed during the pandemic. Support for Ardern soared, even as New Zealand posted its largest quarterly economic decline on record and a second outbreak in the country’s largest city, Auckland, prompted the PM to delay the election by a month.
National’s Collins — the party’s third leader this year — pitched her pro-business party as better placed to handle the pandemic’s economic fallout, but struggled to gain ground against one of New Zealand’s most popular leaders ever.
“We always knew it was going to be tough, didn’t we?” Collins said during her concession speech on Saturday. “We will take time to reflect, and we will review, and we will change. National will reemerge from this loss a stronger, more disciplined and more connected party.