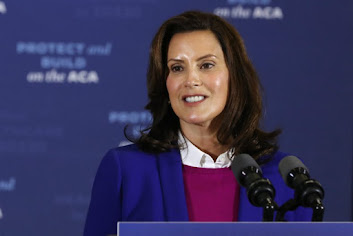 Michigan Gov. Gretchen Whitmer, who the FBI says was targeted by a foiled kidnapping plot, on Sunday accused President Trump of fanning the flames of domestic terrorism when he didn’t put a stop to chants of “lock her up!” that erupted the day before during a rally in her home state.

“It’s incredibly disturbing that the president of the United States, 10 days after a plot to kidnap, put me on trial, and execute me, 10 days after that was uncovered, the president is at it again and inspiring and incentivizing and inciting this kind of domestic terrorism,” she said on NBC’s Meet the Press.

During his rally in Muskegon, Mich., on Saturday, Trump blamed Whitmer for imposing what he sees as too severe restrictions on the state during the pandemic. That led to a chorus of “lock her up!” chants. And instead of condemning the chants, Trump seemed to egg his supporters on, smiling and saying, “You got to get your governor to open up your state,” and “lock them all up.”

A number of members or associates of the militia group Wolverine Watchmen face an array of state and federal charges for allegedly trying to kidnap Whitmer.

“It’s got to end. It is dangerous not just for me and my family, but for public servants everywhere who are doing their jobs and trying to protect their fellow Americans,” the Democrat Whitmer said, urging people on both sides of the aisle to “call this out and bring the heat down.”

But Trump’s senior adviser and daughter-in-law Lara Trump dismissed the rally’s chants as part of the “fun” setting.

Senior Trump campaign adviser Jason Miller told Fox News Sunday that Trump didn’t regret the chant that broke out at the rally, saying the crowd was frustrated by Whitmer’s restrictions for the state.

“I’m glad that President Trump’s [Department of Justice] was able to get these psychopaths and put them away,” Miller said, “but the fact of the matter is, people in Michigan want to get their state opened back up.”

Trump supporters frequently chanted “lock her up” about his 2016 presidential opponent, Hillary Clinton.