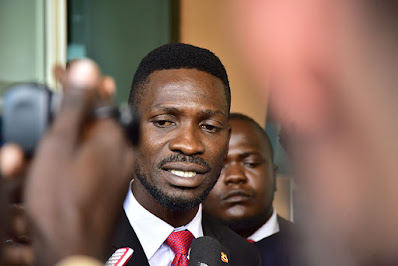 The High court in Uganda this afternoon dismissed an application in which a one Moses Kibalama Nkonge had contested ownership of the National Unity platform. The court has also rejected an attempt to block Robert Kyagulanyi Ssentamu, a.k.a Bobi Wine from using the National Unity Platform(NUP) party to run for President in 2021, the judge dismissed the application with costs.

Robert Kyagulanyi Ssentamu aka Bobi Wine is now legally confirmed as the president of the national unity platiform (NUP) ahead of his presidential nomination for the 2021 elections which is scheduled for 3rd November.
This year in August complainants, who had claimed to be the founder members of NURP, filed the suit at the Civil Division of the High Court, against Kyagulanyi, Moses Nkonge Kibalama (former party president) , David Lewis Rubongoya, Aisha Kabanda, Joel Ssenyonyi, Flavia Kalule Nabagabe, Fred Nyanzi Ssentamu and Paul Ssimbwa Kagombe asking the Electoral Commission (EC) to stop recognising NUP and to de-gazette it with allegations that the change of the party name from National Unity Reconciliation and Development Party (NURP) to National Platform (NUP) and electing Bobi Wine (Robert Kyagulanyi Ssentamu ) as the Party president was illegal.
Today, High court Justice Musa Ssekaana has thrown out the application filed by group saying it was not brought under any known procedure
“This court declines to entertain the application since it was not brought under any known procedure and secondly it was made to avoid the time limit of 3 months within which an application for judicial review should have been brought,” the judge said, adding:“The judicial review guidelines or rules equally provide for locus stand and this would have been the threshold before the applicants would seek to challenge actions of a party. It is an abuse of court process,” Justice Ssekaana ruled.
The court ruling obviously caused celebrations in bobi wine’s People power camp  and yet a very difficult time to NRM party most especially the incumbent president general Yoweri Kaguta Museveni who is facing the worst nightmare of his life for the 34 years he has ruled Uganda.

In a press conference held at the party Head Quarters today , while reacting to the court ruling, Bobi Wine said that without a doubt, National Unity Platform is the next ruling party of the Republic of Uganda.“To God be the glory!

While we thank God for this judgment, we have to be reminded that this was a bogus case. This case was brought to slow us down”.he added