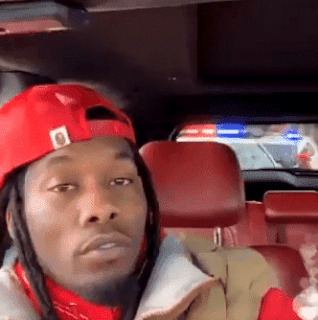 The Migos Rapper Offset was put into handcuffs in Los Angeles after apparently falling out with with Trump supporters. He was detained by cops Saturday in Beverly Hills, But he actually live streamed a number of scenes on Instagram as he was being taken. The video starts with Offset having a conversation with some officers who pulled him over. He tells them he’s not getting out of the car, and he’s not removing his hands from his steering.

Offset says, it sounds like officers might’ve had their guns drawn … because somebody claimed Offset had actually waved firearms at people from his own vehicle. Offset disputes that on camera, and says somebody was following him on the street.

Eventually, he was pulled out of his car and put in handcuffs. He later was detained. Another twist to this … And according to a video posted on Cardi B’s account, Offset’s car was  attacked by Trump supporters though police didn’t take any action on them.